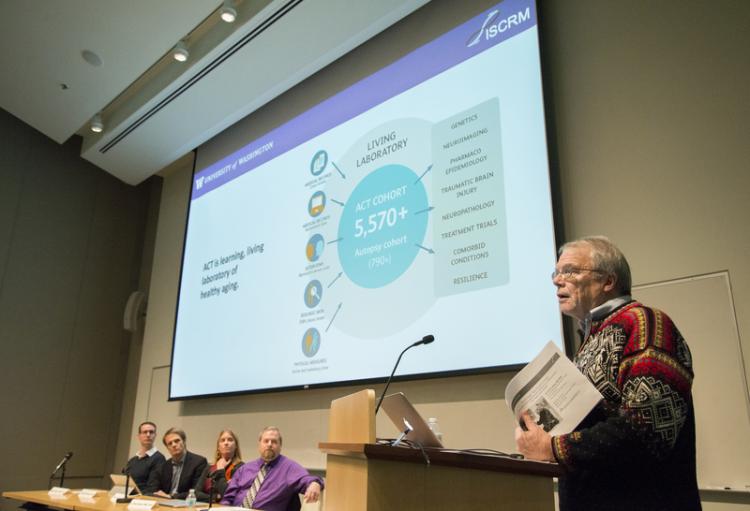 A new study co-authored by UW ADRC and Kaiser Permanente Washington Health Research Institute researchers suggests one-third of people classified as having the highest risk for dementia by a biomarker research tool — the AT(N) framework — will not develop dementia in their lifetime.

One of the biggest challenges in Alzheimer’s research is to identify biomarkers that can determine who is at risk of developing dementia. Such biomarkers could be used to screen people so they might be helped before they develop dementia.

Researchers have focused primarily on three such biomarkers. Two are Alzheimer’s-related proteins, amyloid and tau. Amyloid forms clumps in brains, and tau forms skeins of filaments called neurofibrillary tangles. Both can be detected in cerebral spinal fluid or by specialized positron emission tomography, or PET, scans.  The third marker, brain atrophy, can be seen with CT or MRI scans.

To guide researchers, the National Institute on Aging and the Alzheimer’s Association have endorsed a research tool based on these three biomarkers.  It is called the AT(N) framework—A, for amyloid, T for tau, and (N) for neurodegeneration or atrophy. The hope was that this framework would provide a standard tool to assess an asymptomatic person’s risk of developing dementia.

A new study by researchers in Seattle suggests a subset of people classified by this approach as having the highest risk for dementia will not develop dementia in their lifetime. 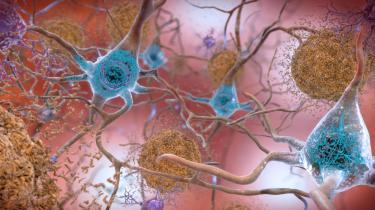 “We used autopsy data to approximate AT(N) biomarker categories from our well-characterized sample, and looked at dementia rates for people in each category,” said Dr. Paul Crane, professor of medicine, Division of General Internal Medicine at the University of Washington School of Medicine. Crane and Dr. Eric Larson, senior investigator and former vice president for research and healthcare innovation at Kaiser Permanente Washington Health Research Institute, serve as principal Investigators of the main study and senior authors of the paper.

The paper appears in Alzheimer's & Dementia: The Journal of the Alzheimer's Association. It is titled  "Theoretical impact of the AT(N) framework on dementia using a community autopsy sample." Bridget Teevan Burke, a research fellow at the Kaiser Permanente Washington Health Research Institute, is the lead author.

In the study, researchers used data collected by the Adult Changes in Thought study. The ACT study started in the 1990s. ACT has followed more than 5,500 older volunteers to identify new cases of dementia.  About a third of the volunteers allowed their brains to be studied after death.

Because Alzheimer’s progresses slowly, the ACT participant autopsy results for amyloid, tau, and neurodegeneration were used to approximate AT(N) classification five years before death.  The researchers considered evaluations over the five years before death to see whether the proxy AT(N) categorization at that time would predict dementia development in those five years.

The AT(N) framework uses eight different biomarker profiles, ranging from none of the biomarkers, designated A-T-(N)-, to profiles where all biomarkers are present A+T+(N)+, and all the possible combinations, such as A+T+(N)- indicating amyloid and tau are present but no neurodegeneration.

The researchers found that 67% of those with the proxy A+T+(N)+ profile developed dementia in the next five years. But 33% did not.

“A+T+(N)+ is supposed to be the highest risk group,” Crane noted. “They have high levels of amyloid, high levels of tau, and have atrophy. Even in that group, a third never developed dementia.”

The findings, if validated with AT(N) biomarkers, suggest that any drug trial using the AT(N) framework will require many more participants to be screened to enroll enough people to achieve statistically solid results, Crane noted. Because PET scans used to detect amyloid and tau cost thousands of dollars, such studies would be even more expensive.

Larson noted, “This paper is important and was possible because of the longtime commitments of ACT subjects and their families, an enduring partnership between Kaiser Permanente Washington (formerly Group Health) and the University of Washington, and decades of funding from the National Institute on Aging.  It highlights the importance of studying not just what we are today calling ‘Alzheimer’s disease’ but also the factors that seem to make people resilient or able to resist cognitive decline and dementia, which are so often seen as inevitable features of aging.”

Dr. Caitlin Latimer, a neuropathologist at UW Medicine and a co-author on the paper, noted,  “Although this study was limited to assessments of amyloid, tau, and neurodegeneration at autopsy, it serves as a reminder that these components are just one part of the complicated puzzle that is age-related cognitive decline. The AT(N) framework is valuable because it places living people on the spectrum of Alzheimer's disease neuropathologic change. This will allow us to better study the concept of resilience to this pathology and encourage the development of additional biomarkers necessary for the accurate prediction of who will go on to develop dementia.”

This news release was written by Michael McCarthy.