Defying Parkinson’s, One Mile at a Time 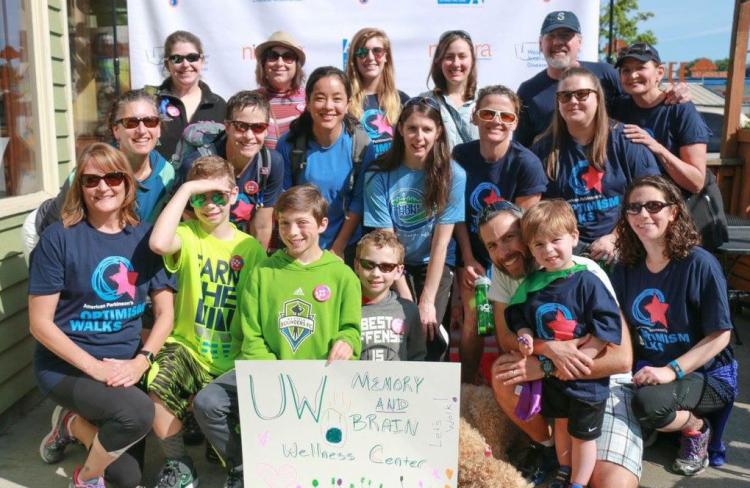 For people living with Parkinson disease, the annual APDA Optimism Walk gets them up and moving in a community of support. The UW Memory and Brain Wellness Center reports from Ship Canal Trail.

In Sunday's 70º weather, a troop of over 300 colorful people (and dogs) strolled along Ship Canal Trail in lower Queen Anne, Seattle, in the 3rd annual Optimism Walk of the American Parkinson Disease Association’s (APDA) Washington Chapter. They had already raised over $63,000 of donations towards Parkinson disease research, treatment, and caregiver support during Parkinson disease Awareness Month.

The UW Memory and Brain Wellness Center (MBWC) team included 14 of the center's members, children, and spouses, all walking in support of the families who receive care at the UW Medicine's MBWC and those who participate in research at the UW Pacific Northwest Udall Center (PANUC), an affiliated NIH-funded research program.

“I think this is a fantastic opportunity to raise awareness about Parkinson Disease, interact with the community, and spend time with those in the MBWC that we don’t normally see,” said Krista Specketer, PANUC Research Assistant and Research Coordinator at the Parkinson’s Progression Markers Initiative. 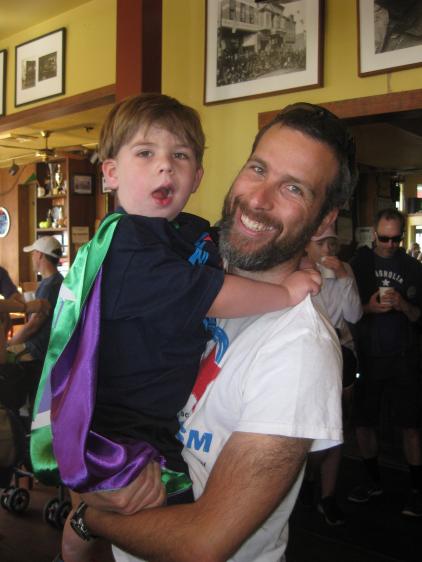 Dr. Ignacio Fernandez Mata, Acting Assistant Professor in Neurology, holds his son Mateo Mata, 3, who collected the most donations of the UW team- $190

Parkinson disease is a progressive neurological disorder affecting more than one million people in the United States, with approximately 60,000 people newly diagnosed each year. This condition causes tremor, walking and posture issues, and rigidity—and yet, many affected individuals marched the 1.5 miles along the waterfront, such as Jose Longoria, who had sped far ahead of his wife and care partner Yolanda by the 5-minute mark.

“We are walking in appreciation of the resources we've received from the APDA, as well as to raise awareness” said Mrs. Longoria. “Jose was diagnosed in December, but there's still so much we don't know. Being a part of this community puts us in touch with activities, support groups, and the latest information available.” This pair attends the $5 Yoga for Parkinson's classes at UW Medicine's Northwest Hospital. Indeed, physical activities such as yoga, dance, cycling, and Tai Chi for individuals with Parkinson’s have shown positive effects on muscular strength, balance and quality of life. 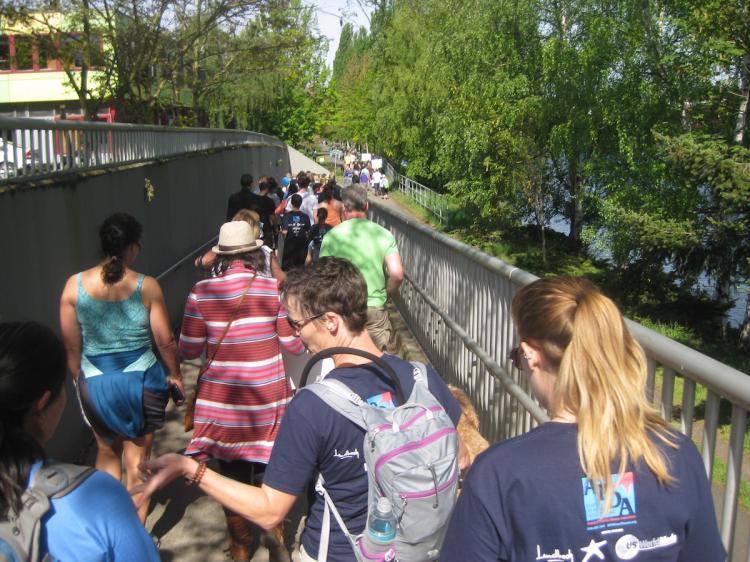 Like Mr. Longoria, the Optimism Walk's participants living with Parkinson disease all said they valued the opportunity to move. John Schofield of Team Schofield’s DOPE-a-mines, has been living with Parkinson’s for 20 years and has undergone Deep Brain Stimulation (DBS) surgery. “I keep to myself a lot, but I know that I'm doing something good by walking in this event. It's nice to participate in this walk every year because there are never enough excuses to get out.” 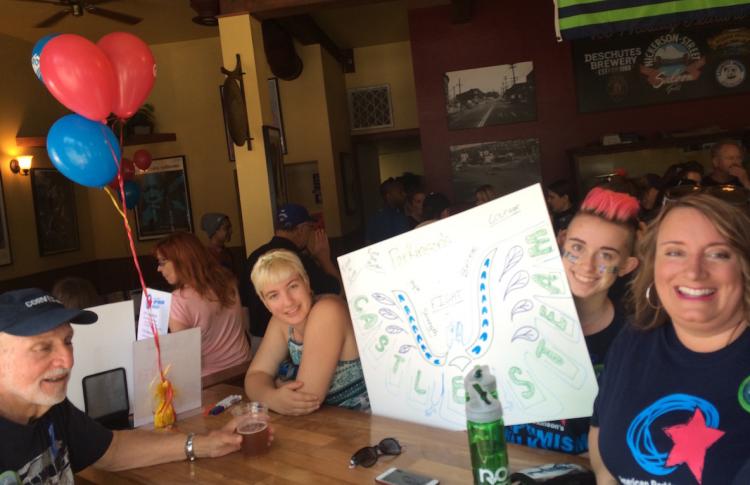 The Castle family of Kent, WA walked for father, Adam (pictured below), who lives with early-onset Parkinson disease.

Then there's Adam Castle of Kent, WA, who was diagnosed in July of 2015. “After sitting down for 20 minutes, my legs become so stiff—like Frankenstein,” he said. “So, it's great to have the chance to move around with all this support around me.” He gestured to his wife, Kyla Castle, his daughters, and father-in-law, sitting around the table at Nickerson Street Saloon. The restaurant provided the free lunch and live music by the Kennedy Brothers after the walk.

In the support group for early-onset Parkinson disease offered by the APDA Washington Chapter, the Castles say they've found an extended family and inspiration from those who still walk the Pacific Crest Trail. 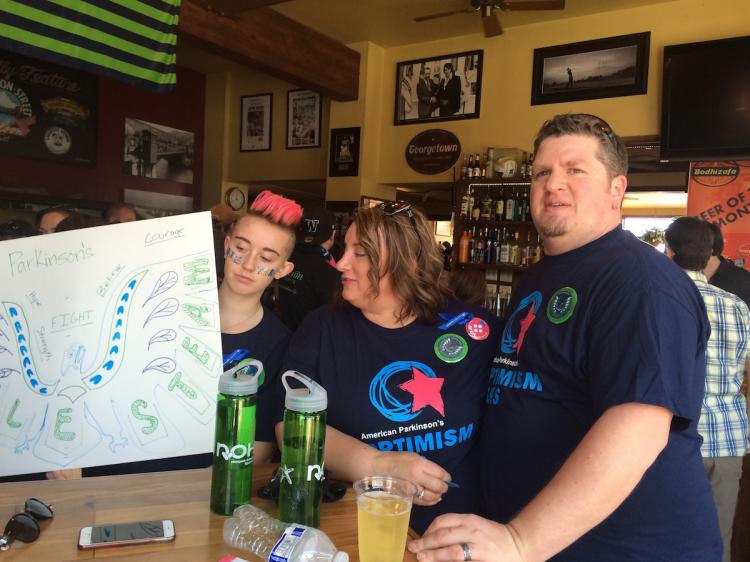 Adam Castle (right) values the opportunity to move around, at his own speed, with his family and community.

The ADPA funds treatment-focused research on the federal level and promotes patient services and education. The Executive Director of the ADPA Washington Chapter, Jean Allenbach, said, “This walk brings the community together, so all these different people who have Parkinson disease from all over the region can meet each other and have fun. It's a big part of the ADPA's dual mission to ease the burden and find a cure, or as I like to say, give help for today and hope for tomorrow.” 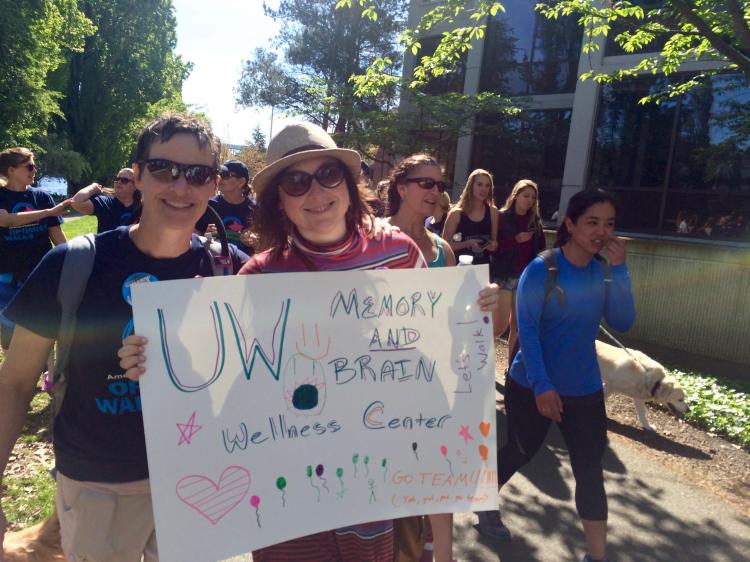 As a neurogeneticist who studies genetic risk in Parkinson disease, Dr. Ignacio Fernandez Mata walks for a reason that bridges his personal and professional life. His PhD fellowship was funded by a Parkinson disease support group, Asociacion Parkinson Asturias, in his home city of Oviedo in Asturias, Spain. Deciding to invest in his neurogenetics research, the group managed to pull together money from a small local bank grant and monthy donations from patients.

“I had an incredibly close relationship with those patients,” he said. “And since then, I have always kept in mind that what we do in the lab is for them, for the people. Sometimes researchers kind of forget. Events like this one are a great reminder of why we do what we do every day.” 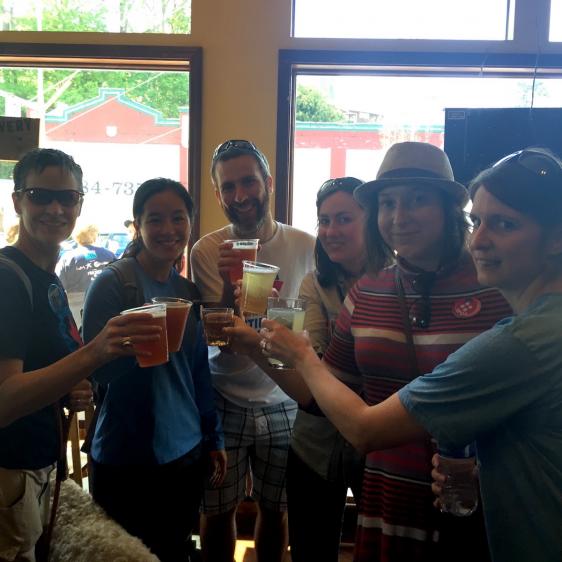 I have always kept in mind that what we do in the lab is for them, for the people. Sometimes researchers forget. Events like this one are a great reminder of why we do what we do every day. -Dr. Ignacio Fernandez Mata