Below is a story of a tour I took during my study abroad trip to India over the summer of 2014. Excerpts from the journal I was keeping at the time, as well as photographs, are included.

“Today, we embarked on the Salaam Balaak Trust Street Walk. We met our guide by New Delhi train station, and began the tour from there.” 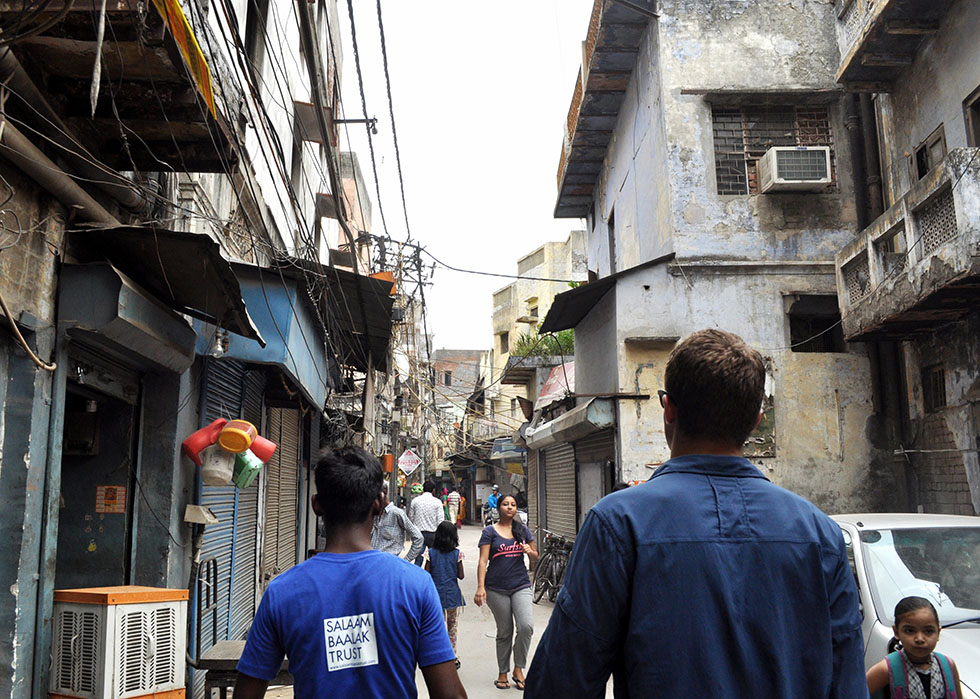 Salaam Balaak Trust is an organization that reaches out to the street kids in New Delhi. As our tour guide explained, many kids, who are either abused at home, orphaned, or too much of a financial burden to their parents, find their way to New Delhi by train to make it on the streets. The kids survive by doing small jobs here and there or by pickpocketing. They live in fear of the police, lack of food, and lack of shelter. The tour guide, who was a former street kid himself, said that many kids spend the little money they earn on drugs and entertainment, and can often be found at the movie theaters, watching shows, doing drugs, and resting.

“At the start of the tour, the guide had our group gather around him, and quizzed us on our knowledge of street life in New Delhi. At one point, he asked, “What drug is popular on the streets here?” We volunteered our guesses, “Heroin?” “Weed?” “Maybe cocaine?” Nope. He said, “Those drugs are too expensive. Glue is the popular drug on the streets.” Everyone seemed surprised. I definitely was … I was naïve enough to believe a street kid could afford cocaine.” 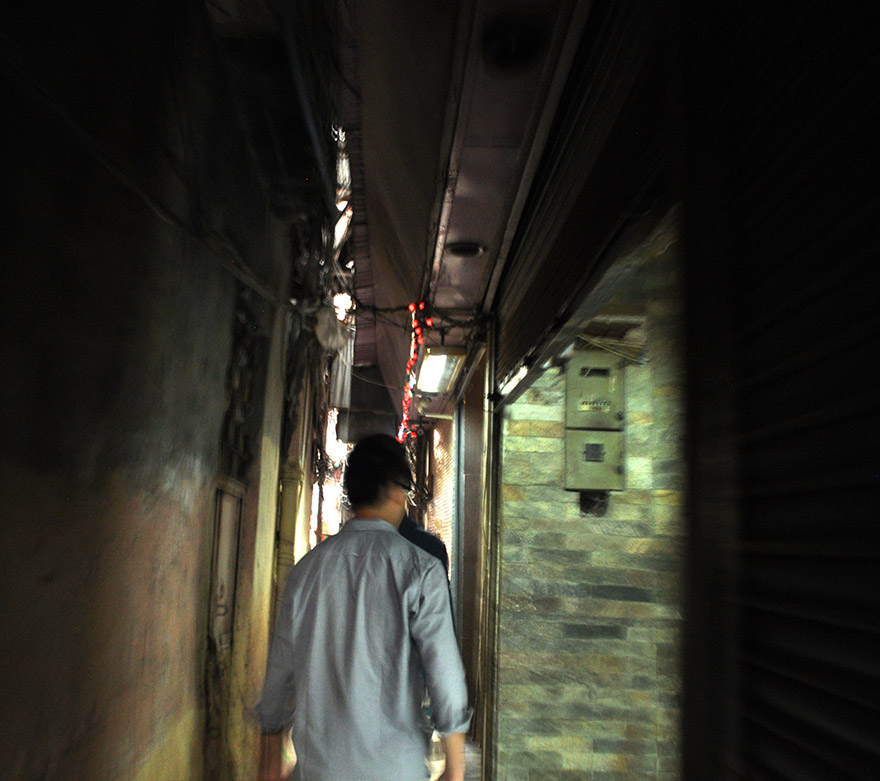 The tour took us through narrow streets in New Delhi. At times, we had to walk single file through tights alleyways that were completely dark in broad daylight. The streets would seemingly become more and more narrow, then unexpectedly open up to a wide, bustling street with markets and tuk tuks zooming by. I was amazed, it was my first time away from the tourist hubs of New Delhi, and I was overwhelmed by everything.

“New Delhi is crazy. It smells, it’s dirty, the winding streets have little sense to them (from my perspective, anyways,) and there are people everywhere. A man I met at SeaTac airport before I arrived described New Delhi as “a complete shithole,” which is warranted given the city literally smells like crap. Nothing about the city can be described as ‘nice.’ But I’d say New Delhi is remarkable, in that it is very alive. The way people occupy the city and use it gives you the sense that New Delhi is a place where people live. Which in some ways makes the place seem more authentic than any other place I’ve been.” 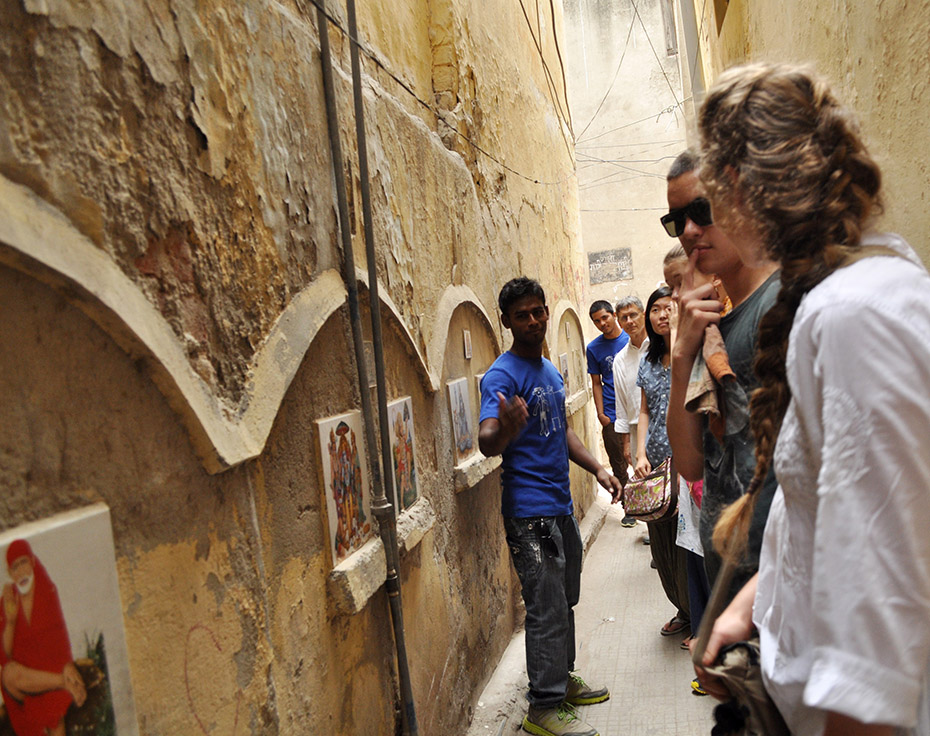 “Randomly, the tour guide stopped us in an alleyway and drew our attention to a wall with images of deities plastered to it. “Can anyone guess what these icons are doing on this wall?” Silence. “Um… people come here to pray?” Wrong answer. “There was a problem for a long time where people were peeing on this wall. To stop this, these images of gods were placed, so that people would have to do their business somewhere else.” This seemed unrelated to the tour, but was interesting nonetheless. Every religious figure I could think of was represented on the wall, Jesus included.”

At certain points during the tour, the guide stopped us at locations where social workers from Salaam Balaak Trust tend to find and interact with kids working and living on the street. The social workers attempt to persuade the kids they meet to move to the organization’s shelter. If a child agrees to go to the shelter, the first thing the social workers do is reconnect the child with his or her family. If the family is reached, and it is deemed that it isn’t in the best interest of the child to return to their family, then the kid stays is entered into the shelter full time, where he or she receives an education, food, and supervision. 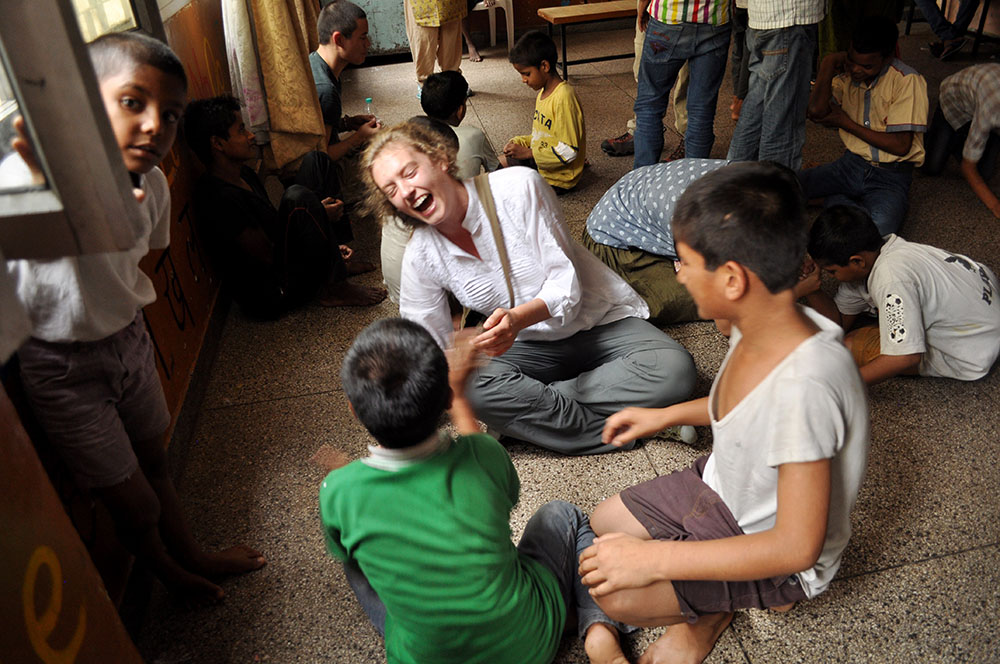 At the end of the tour, we were led to one of the shelters run by Salaam Balaak Trust, and given the opportunity to meet and play with the kids living there. The kids were full of energy. They challenged us to arm wrestling matches, and showed us break dancing moves that they knew. We practiced our Hindi while they practiced their English. Though we were at the shelter for a while, it felt like a short visit. Before we knew it, we were told to say goodbye to the kids, and were led from the room.

The experience was both uplifting and heavy. The kids, and the individuals working at the organization, were incredible, and filled me with a sense of faith in people. I struggled with myself for a while afterwards, though. I had difficulty coming to terms with the entire situation, and my place in it.

“I’m having difficulty grasping the situation. I guess I’m surprised by how the issue is tolerated. How is a kid able to leave their home, get on a train, and end up on the street, without any intervention by authorities or adults?

“But then, does it even matter that I’m concerned or asking questions? I’m just a tourist here, peeping in on the situation. I feel uncomfortable. I don’t have a reason to care for the people I see here, I don’t live here. And did I really feel sad on the tour, or was I just in awe?”

Andrianna is a junior studying International Studies and Human Rights. She studied abroad in India in the summer of 2014.