Highlights of the 2019 Discovery Conference 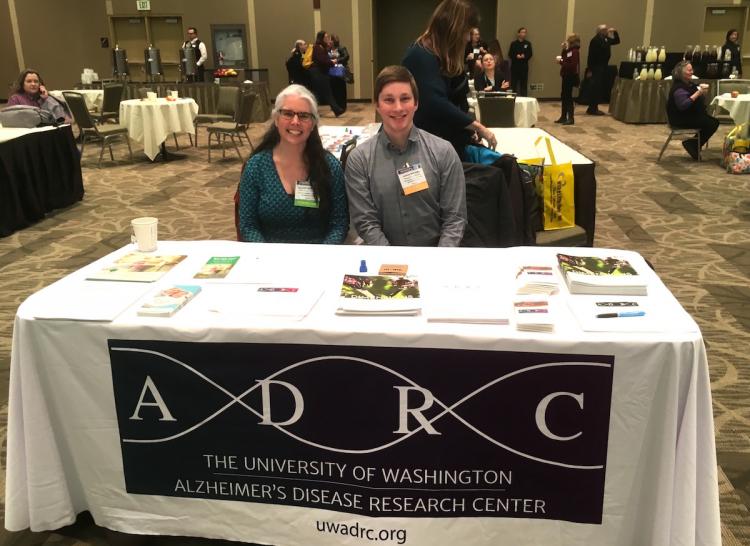 We bring you some highlights of the 34th Discovery Conference of the Alzheimer's Association Washington State Chapter, from talks presented by UW Memory and Brain Wellness Center team members.

This year, ADRC Clinical Research Coordinators Jessica McDougall and James DeLappe spread the word about the community programs of the UW Memory and Brain Wellness Center and the research activities ongoing at the Alzheimer's Disease Research Center. If you missed it, you can learn about enrolling studies and trials here, and sign up for our monthly newsletter and/or bi-annual magazine here.

Alzheimer's vs. Dementia? Getting the Distinction Straight

This discordance between Alzheimer's (neuropathological) and dementia (clinical) explains the need for the new definition for understanding this disease in the research world, which radically respects the difference between disease and syndrome. In this new NIH framework, research participants in ADRC studies will be categorized by biomarkers, or measurable characteristics that signify disease, such as imaging tests and blood or spinal fluid protein levels. In this way, researchers will have a systematized way to study preclinical Alzheimer's disease. They can define biological states that can be targeted by intervention. Additionally, researchers will be better able to identify and study resilient people--people who have significant Alzheimer's changes, but do not show symptoms. Dr. Grabowski noted the drawbacks: Even though this framework is meant only for research, it may be impossible to keep it out of the clinical world in the information age, and there is pushback around the idea of diagnosing asymptomatic people with Alzheimer's changes.

Dr. Grabowski also announced major promising results in use of a blood test (Ovod et al. 2017) and synaptic PET scans (Chen et al. 2018) for detecting Alzheimer's diseases and tracking progression, as well as new evidence to suggest that epileptic-like activity in the brain, sleep apnea, and sleep disorders may contribute to the progression of Alzheimer's disease, but he noted that these are also treatable risk factors. 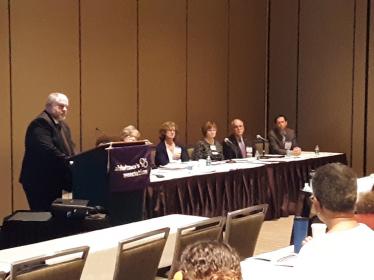 One of the DAC's main goals is to identify and endorse evidence-based standards for primary care practice. As the number of people living with dementia increases 181% by 2040, primary care practitioners will need to shoulder more and more dementia detection and provide guidance for families. The panel highlighted the DAC Clinical Provider Practice Tool to give clinicians a guide on the steps to take after a patient develops concerns or signs of possible cognitive impairment, including diagnostic and referral guidelines for specific neurodegenerative diseases, medication best practices, and management resources. The tool also recommends that clinicians offer people ways to maximize their function and stay engaged in hobbies and activities. For example, the tool suggests providing people to the Living with Memory Loss: A Basic Guide, produced by our team at the UW Memory and Brain Wellness Center clinic, specifically for people living with a diagnosis of dementia or mild cognitive impairment.

"We are trying to overcome the provider nihilism that there's no point of providing a diagnosis because there is nothing that can be done," said Dr. Rhoads on the panel. "And that's not true."

But how will DAC encourage clinicians to focus on early diagnosis and support? The future plans of the DAC, which will cost $5.4 million, include spreading such dementia care best practices to primary care practitioners through the tele-health platform Echo, which will allow remote communication between groups. They will also develop a dementia care specialist program to offer services to families in specific areas; promote public awareness through evidence-based and culturally relevant messaging around aging and dementia; and promote advance care planning.

To highlight existing public information, the panel announced memorylossinfowa.org a resource of Washington State’s Community Living Connections for the local public offering information and resources on memory loss and Alzheimer's and dementia, including detailed sections on driving, long-terms support and services, caregiving, medical and safety, issues, and legal/financial. Also available is the Dementia Road Map: A Guide for Family and Care Partners. For a paper copy, please send your name and mailing address to dementiaroadmap@dshs.wa.gov.

In the Fall 2018 edition of Dimensions Magazine, our center highlighted a new collaboration funded by the UBC Cascadia Engagement Fund to bring people together to learn about creating sustainable dementia-friendly communities. Researchers from the University of British Columbia are learning about the Seattle Momentia grassroots movement, and the UW MBWC team are building a better understanding of how different communities can manifest a new vision of social belonging for people with dementia, through community action and innovation.

The team attended the Discovery Conference panel to provide an update.

Panelist Gloria Purveen, PhD, of UBC joked that this Citizen Across Borders project is necessary because "Seattle and Vancouver literally share a fault line, so we should get used to solving big social problems together."

Dr. Lee Burnside, MD, of the UW MBWC, and Gloria Purveen, PhD, and Alison Phinney, PhD, RN, of the University of British Columbia shared their joint work to use arts to enhance personhood, with the ultimate goal of giving people dementia he ability to leave a legacy and participate in shared decision making, even without the physical ability to speak for themselves. Burnside especially wants to promote the visual arts programs, such as the Here:Now program at the Frye Art Museum, to enhance empathy among palliative care clinicians. "How do we teach clinicians to be more in tune with people living with dementia?" 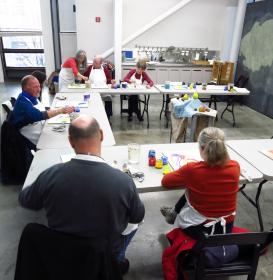 They also announced their 5-year plan to complete their vision to establish final guidelines to support social citizenship and impact measures, in partnership with community groups and people with dementia. The project, Putting Social Citizenship into Practice: Reducing Stigma and Promoting Social Inclusion for People with Dementia, starts with recruiting an action group of citizens to decide on a working definition of "social citizenship." The group with conduct research with--not on--people living with dementia, to establish approaches for community programs to support social citizenship. They are funded by the Canadian Institutes of Health Research, and will partner with the Alzheimer's Center of BC, Center for Applied Ethics, and The UBC Center for Research on Personhood in Dementia.

The also gave the audience a teaser for a party to be held in July on the BC side of the border, called Dementia without Borders: A Party at the Peace Arch. Stay tuned for the details to be posted on this website!

Thank you to Elisabeth Lindley, registered nurse practitioner at the UW MBWC clinic, who worked on the 2019 Planning Council to provide input on the topics for this year's Discovery Conference.

Early stage memory loss provides the opportunity to develop new habits in your life, as well as an opportunity to begin developing your voice as an advocate in your community. - Marigrace Becker of @MemoryBrain_UW pic.twitter.com/2LlkcGcbeJ

We now know that #Alzheimer's dementia is the late manifestation of a process that has been going on in the brain for 15 years: Neurologist Thomas Grabowski MD of UW Alzheimer's Disease Research Ctr. #AlzDiscovery2019 #ENDALZ @ALZ_WA @MemoryBrain_UW pic.twitter.com/RFZkuzwiHX

If we slow down our bodies, our minds will follow. We need to slow our momentum in order to make space to listen to others. -Jonathan Prescott #AlzDiscovery2019 pic.twitter.com/eLYYiYeOcp

The #AlzDiscovery2019 Conference had a great start with keynote speaker G. Allen Power discussing “a shift in the way a person experiences the world.” #ENDALZ @alzassociation @ALZ_WA pic.twitter.com/6EiS98o3b6

We tend to see people primarily for their deficits... we have put blinders on for how to support people because all we see is the disease. This is a limited view - @alpower12 #AlzDiscovery2019 pic.twitter.com/WoNhzje6Op