Look on the Bright Side: Dementia Prevention

Of Americans 65 and older, about 20 to 25 percent have mild cognitive impairment and about 10 percent have dementia. People often ask if rates of dementia are rising, or falling. It depends on how you look at it. The prevalence of dementia in the US decreased from 11.6% in 2000 to 8.8% in 2012 in the U.S., likely because of increases in education and cardiovasular heath, according to research co-authored by ADRC's Dr. Eric B. Larson. Nonetheless, the number of cases of people living with dementia is actually rising. Longer life expectancies, thanks to progress in preventing and treating heart disease and cancer, has led to an expanding population of the oldest groups of people. As baby boomers age, the number of individuals over 65 with Alzheimer-type dementia will triple to 13.8 million by 2050, incurring a trillion dollars of direct and indirect costs to the economy and families. 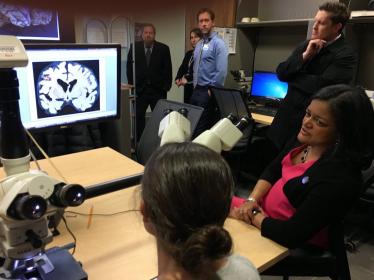 According to Dr. Thomas Grabowski, Director of the UW ADRC, prevention of dementia will be a powerful solution. “The incidence of Alzheimer's disease-type dementia doubles every 5 years after age 65, and so if we could delay onset by 5 years, we could cut the number of cases in half, and by inference, we could cut dementia-related costs in half,” he said in a testimony for the 2017 Senate appropriations subcommittee hearing on NIH medical research.

Currently, there is little definitive evidence about what can stop age-related cognitive decline and the onset of dementia, but more and more research suggests that attaining better brain health and resilience, even later in life, can postpone an individual’s tipping point for years. Here is a list of evidence-based approaches to delay, slow down, or even prevent symptoms of Alzheimer's disease.

-A trial of more than 2,500 older adults at risk for dementia tested whether a tailored diet, an exercise program, brain training, and close monitoring of risk factors for vascular disease would make people less likely to develop the condition. After two years, the participants who received the interventions had higher scores on memory and thinking tests than the participants who just followed regular health advice. The results are reported in Lancet.

-2020 findings from the SPRINT-MIND study found that lowering blood pressure to under 120 showed a 19% reduction in those  participants who went on to develop dementia during the study.

-Work up a sweat for 45 minutes, 4 times a week! A study published in Alzheimer's & Dementia of 65 sedentary adults showed that this amount of exercise reduced tau protein in the brain and improved memory, attention and executive function.

-If you like to dance, embrace every chance to move to a beat. At the University of Illinois, researchers enrolled physically inactive men and women aged 60 – 79 in country western dancing lessons and studied the brains using imaging over 6 months. The scans showed that, compared to study controls who took walking or stretching classes, only the adults in the dancing group showed denser white matter in the brain’s fornix. This tiny triangle of tissue deep in the brain plays an important role in making and recalling memories, as well as motor performance and problem solving.  Read: Dancing to Remember

-In terms of brain and cognitive health, the best data support the Mediterranean diet, which includes relatively little red meat and emphasizes whole grains, fruits and vegetables, fish and shellfish, and nuts, olive oil and other healthy fats. "I keep coming back to the basics," says UW MBWC's Dr. Angela Hanson, "more whole grains rather than simple sugars, more fruits and vegetables rather than junk food, and more servings of seafood rather than red meats."

-A study published in Alzheimer's & Dementia of 923 adults aged 58-98 who maintained the MIND diet for 4.5 years showed a 53% reduction in the incidence of Alzheimer's disease dementia. The MIND diet is a hybrid of the Mediterranean diet and DASH (Dietary Approaches to Stop Hypertension) diet.

-An NIH-funded study found that eating a Mediterranean diet slows some changes in the brain that may indicate early Alzheimer’s disease. The researchers estimate there may be as much as a three-and-a-half-year delay in progression of Alzheimer’s disease in people who have eaten a Mediterranean diet for many years, rather than a standard Western diet.

-After an 8-week meditation course, caregivers in a UCLA study showed decreases in markers of cellular aging, an important predictor of overall health and resilience to disease. These participants also reported less distress and better mood and thinking skills.

-For everyone, mindfulness meditation likely holds value for preventing or delaying cognitive decline, as suggested by research showing re-wiring of the brain, improved emotional resilience, and reduced modifiable midlife risk factors for Alzheimer's disease, such as high blood pressure and cholesterol. What’s more, researchers see these positive changes after 8-weeks of guided practice in people with no prior history of meditation.  Visit Mindfulness Northwest.

Did you find this webpage useful? Send feedback to gwanucha@uw.edu

Subscribe here! Fill out our sign up form to receive our monthly e-newsletter and/or our bi-annual magazine, Dimensions.